Shortly after I graduated with my bachelor’s degree, I began planning a trip to Europe with a friend of mine. I never had any of the typical high school or college experiences, so I had these ideas of grandeur to make good on one cliche – backpacking through Europe: a 20something girl, traveling through a half-dozen European countries, hopping trains, and making memories. Dad quickly put the kibosh on that one when he explained that I’d never be able to pack all I wanted or needed into a backpack and traveling the ancient, cobblestone streets, with a rolling suitcase behind me, just wouldn’t have the same appeal.

So in October of 2007, complete with a great traveling companion and more bags than any one person would ever need, two single girls set out on the trip of a lifetime. I remember dad telling me, as he was trying to fit all of my suitcases into the trunk on our way to the airport, how I would never be able to handle all of my own bags and that I was taking way too much stuff with me. Of course my independent, I-Can-Do-Anything-I-Want, self said I’d have no problem finding a guy on the airplane or at the baggage claim to help. And I didn’t. Chivalry isn’t dead; you just have to know where to look for it. I had all the assistance I needed to put my bags in the overhead bins or to pull them off of the baggage carousel. But what I hadn’t planned on was a cranky, middle-aged, taxi driver in Madrid, Spain.

Armed with my traveling expertise and what little broken Spanish I still knew, I negotiated a flat fee taxi fare before we ever put a bag in the trunk. After our 45 minute ride to our hotel had turned into an 1.5hr tour of every back road and alleyway there was to downtown Madrid (unknown to us or our taxi driver, the main streets had been closed due to a bicycle race) I felt really good about negotiating that fare up front that now would have been double had we been paying off of the meter. Good that was until he abruptly pulled over on a side street, dumped all of our bags on to the curb, insisted we get out of the taxi, and pointed in a general direction saying in broken English “Your hotel! Your hotel!”. The moment he drove off, leaving us stranded and dumbfounded, I turned to my friend and plainly said, “that’s NOT our hotel”.

After 7+ blocks, walking the busy Gran Via (uphill), lugging behind me two full-size suitcases, two carry on bags, and a personal bag, I could do nothing more than stop and begin laughing hysterically thinking “if dad could see me now he’d be saying ‘I told you so'”. Those words haunted me the rest of the trip, included as I was flying back and missed our connecting flight in Chicago and I found myself running barefoot (no time to put my shoes back on after security) through the terminal, trying futilely to catch another connecting flight, only to arrive at the gate, bags in hand, as the connecting flight was pulling away. I had never hated baggage so much in my life as I did at that exact moment.

These memories are what have come to mind each day this week as I woke up every morning with a song on my heart, Suitcases by Dara Maclean.

How can you move when they’re weighing you down? What can you do when you’re tied to the ground…You carry your burdens heavy like gravity. Just let them go now, there’s freedom in release. You can’t run when you’re holding suitcases. It’s a new day, throw away your mistakes and open up your heart, lay down your guard, you don’t have to be afraid.

Have you ever tried running with a bunch of suitcases? As you can see above, I literally have, and it isn’t easy; it’s downright exhausting. Now think of those suitcases as your past and give them a name:

Can you imagine running, or even just walking, through life carrying all of that baggage around? People do it every day. Now think of your relationships – every one of those bags that you hold on to gets carried in to that relationship. Add to that, the baggage your partner brings, and before you know it you’ll be so weighed down by the past, you won’t be progressing forward any more.

You can probably guess what I’m going to say next – my one reoccurring theme: this isn’t God’s best for you! Carrying around your hurts, your brokenness, your baggage isn’t what God wants for you. It’s just like the new series my church has started, Found in You. In Him, in Christ, we have been redeemed, we have been washed clean of our past, and we have been made righteous in Him.

2 Corinthians 5:21
God made him who had no sin to be sin for us, so that in Him we might become the righteousness of God.

Ephesians 1:7
In Him, we have redemption through His blood, the forgiveness of sins, in accordance with the riches of God’s grace.

When we were redeemed and made righteous in Him, our past was wiped clean. Every bag we once held on to was thrown away. God keeps no account of our past we have been forgiven of. It’s only us, and our human nature, that continues to bring it back into the present. His word very plainly tells us that over and over again:

Psalm 55:22
Cast your cares on the Lord and He will sustain you; He will never let the righteous be shaken.

1 Peter 5:7
Casting all your care upon Him; for He careth for you. 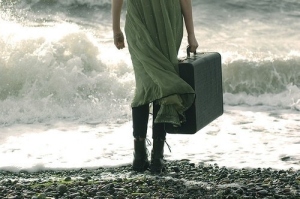 Micah 7:19
Once again You will have compassion on us. You will trample our sins under Your feet and throw them into the depths of the ocean!

Those cares and sins are the bags we hold on to. The baggage of our past. God has a plan for every one of us (Jeremiah 29:11). When we accepted Jesus as our Lord and Savior, the plan (or flight) we had for ourselves got replaced (rerouted) with the plan (flight) God has for us. But the more baggage you hold on to, the more you’ll get held back, and the more likely you are to miss the next flight and have to be rerouted to another one.

God’s mercy on us will always bring us back to our final destination in Him when we repent and seek Him, but it doesn’t have to be that way. You don’t have to be the person standing at the gate, holding all of your bags, as you watch your plane pull away and wait for the next one. No, God’s standing at the ticket counter saying “Give ME all of your bags. You don’t have to worry. You don’t have to care. I’ll take your cares and lose them over the Atlantic ocean and make sure you have everything you need when you arrive at your destination and I’ll exceed any expectation you might have.” Trust me, it’ll be one flight where you won’t mind having your bags lost.

So don’t be someone who holds on to your past, to all of those bags. And don’t allow that baggage to define who you are. There should be only one thing in life that defines us – Christ. I don’t want my past to define me. I want who I am in Christ to define me and my future. The only piece of baggage I want to take into my future – into a relationship – into a marriage one day – is the suitcase labeled “Redeemed and Righteous in Him”. Let go of your Samsonite past, throw your suitcases into the ocean of forgetfulness, and look ahead to the future God has for you! He’s got a first class seat waiting for you, but checked bags aren’t allowed, so pack light.

Philippians 3:13
…BUT one thing I do: forgetting what is behind and straining toward what is ahead.